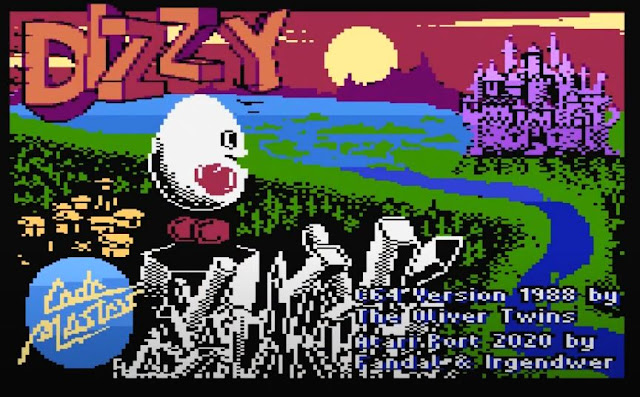 Ever since I had an Amstrad CPC 464 and then on to an Amiga, I have always been a massive Dizzy fan, playing pretty much every Dizzy game ever released since 1987 by the famous Oliver Twins. In fact we’ve featured so many Dizzy games throughout the years you’d think I was a bit of a Dizzy hoarder. Well that isn’t about to stop anytime soon, as we’ve just found out that the classic and original Dizzy game of Dizzy – The Ultimate Cartoon Adventure has now appeared on the Atari XL/XE thanks to Irgendwer and Fandal.

This game is a platform adventure where Dizzy must search the fairy tale land of Katmandu for a Leprechaun’s Wig, a Cloud’s Silver Lining, a Vampire Dux Feather, and a Troll Brew and deposit them in a cauldron to make a potion to defeat the evil wizard Zaks. The gameplay involves collecting items and moving to other locations where the item is required; for example, at one point a raincoat is needed to protect against damaging rain. This is made more difficult because only one item can be carried at any given time. But be careful of the Bats, the Rats and other such deadly objects in this fabulous Atari XL/XE port!