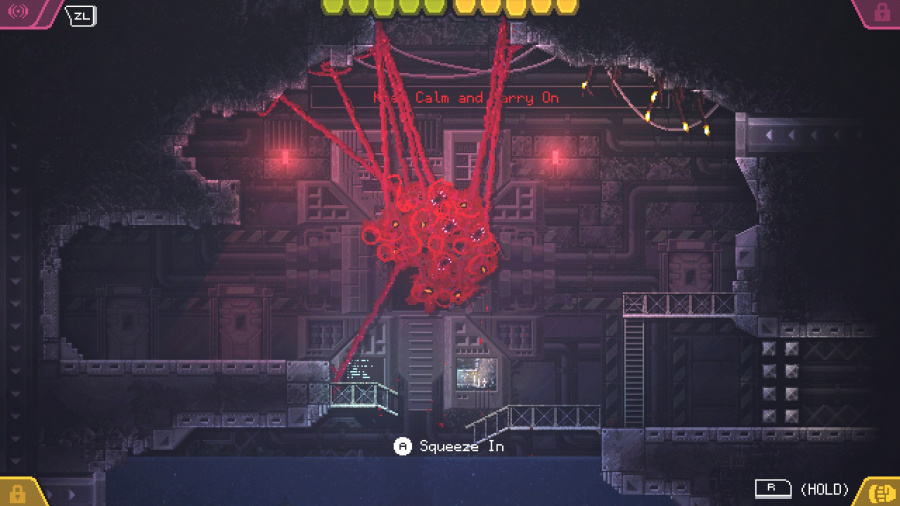 We haven’t played a lot of games that made us feel like a monster. A real predator. The measured and ultimately law-abiding stealth of the Batman: Arkham series had its power-fantasy moments, but nothing that made us sit back and think for a minute about what we’ve done. Enter Carrion.

Taking control of an amorphous, many-tentacled eldritch thing, you slither and writhe and stalk and pounce through an enormous industrial facility, finding out what happens when vulnerable fleshy humans come face-to-face with an entity that’s 150% teeth and claws by volume. (Spoiler: It’s not pretty)

Yes, in Carrion, you are the final boss, so to speak. Moving with the left stick, you’ll use the right stick and trigger to grab things – mostly people – with your tentacles, slamming them against walls, hurling them through corridors or simply bringing them into your ravenous maw to hungrily tear in half. Then go back and eat their legs too, because there’s good meat on those pins. It’s shockingly violent and downright bloody exhilarating.

The movement in Carrion is absolutely exceptional. It’s so slick and responsive, yet perfectly inhuman as you slink along walls and ceilings towards your terrified prey. Grabbing objects and hurling them through the air is as graceful and intuitive as the act of mashing a living person against a wall with a metal grate could possibly be, and, despite your totally alien appearance, motion and animation, you always feel completely in control. It’s something very special in this respect and honestly one of the most responsive, enjoyable player characters we’ve ever experienced.

It’s a shame, then, that the Metroidvania area design is often a little perfunctory by comparison. Bad? Absolutely not. But it’s a little bit of a comedown after eviscerating rooms full of screaming humans just to be effectively pulling switches to open doors. That’s what we’d expect from every other game, but not something that’s otherwise as dynamic as Carrion. Squirming around the base using echolocation to find save points just feels a little inorganic in a game where every other action feels so darn natural. But putting aside these minor structural complaints, there’s plenty of murderous fun to be had, and clearing out rooms of humans – armed or otherwise – never stops being fun.

Adhering to the expectations of its genre, Carrion has you develop new skills as you explore the game; without wanting to spoil anything, the first two you gain are the ability to launch webbing (which draws comparisons to Marvel’s Venom) and a powerful lunging slash move that reduces any humans dumb enough to remain in proximity into a fine mush.

These new abilities are classic Metroidvania in that as well as opening up your offensive options, they’re also used to access paths to new areas; the webbing can activate switches your tendrils can’t reach, and the lunge can break through certain walls. Additionally, as your human enemies gain some measure of courage and begin fighting back, these techniques will help you retain your edge. And by edge, we mean the sharp edge of your claws as you rip some hapless minion in two. (He truly thought his electric shield would protect him. They all did.)

There’s a neat twist to these powers; they’re based on the entity’s mass, and growing too large can remove your access to certain abilities, requiring you to seek out the nearest body of water in which you can shed some of your gross spaghetti-and-meatballs flesh and resume your gore-tacular adventure, freshly equipped with the skills you need to move on. It’s something new, but ultimately it feels a little like busywork having to change up your “loadout” later in the game. On top of this small issue, there’s also a distinct lack of any kind of in-game map – and it’s a big world with lots of junction points and hidden side areas. We can easily imagine getting hopelessly lost just from putting the game down for a few days and then coming back to it.

Aesthetically, Carrion is more or less faultless. It’s smooth and gorgeous, with the creature itself destined to be one of gaming’s more memorable protagonists (or should that be antagonists?). There’s a parallel storyline running through the game in which you take control of a human for brief segments, and it’s testament to the design ability of Carrion’s developers that these segments are a fascinating diversion rather than an unwelcome wrenching away of your accumulated power. The music is excellent, too – suitably foreboding and filmic, we we genuinely taken aback by its quality. It sounds expensive, like a horror blockbuster. Oh, and the screams of terror are particularly nice, too.

Carrion is a special thing in many ways, but its actual meat and potatoes structure is as formulaic as the genre gets. Thankfully, its core gameplay of tearing room after room of people into wet chunks of corpse never, ever gets old, and sustains the experience throughout. It looks superb, sounds great and is plenty of fun to play, despite some minor issues which just hold Carrion back from the upper echelons of the Switch library.