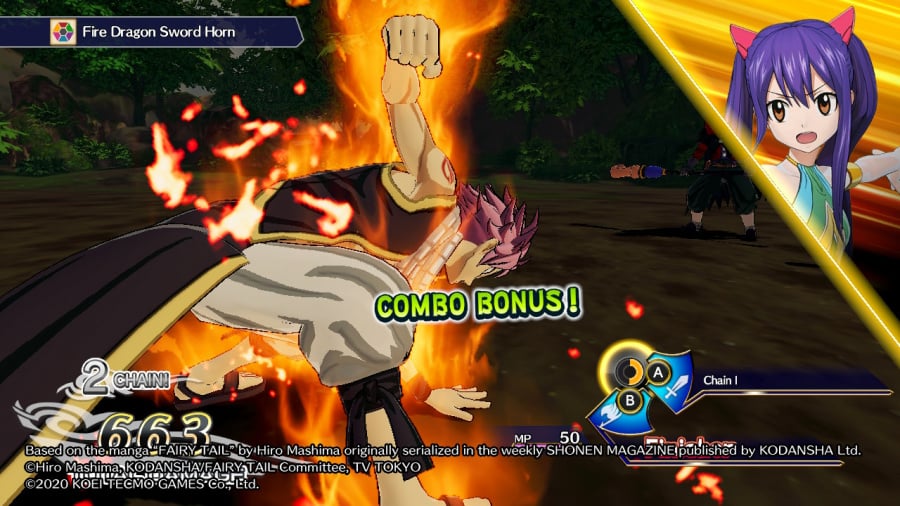 Every now and then, it’s nice to have a good cheeseburger. Just a good one. Not one of those fancy burgers that come with everything but the kitchen sink, or those made out of some specially treated beef, but just the bog-standard and no-frills patty that you can get at just about any fast food joint. Part of the appeal is that you know exactly what you’re getting out of the experience; it’s cheap, easy, tastes reasonably good, and doesn’t cost a ton. Fairy Tail – the newest video game adaptation of the popular anime series – is the video game equivalent of that cheap cheeseburger. It’s unambitious and fails to make much of an impression, but it never presumed to do so. It does almost nothing to set itself apart from its genre peers, but you also know what you’re getting if you choose to pick it up. Fairy Tail was clearly never meant to be a game that shoots for the stars, and while it doesn’t make any egregious mistakes in the experience it offers, there’s very little here to spur excitement or high praise.

The story picks up in the final act of the Tenrou arc, which sees the guild experiencing a seven-year time skip that leads to their beloved reputation being completely dismantled. Buried in debt and mostly forgotten by the community, Fairy Tail needs to re-establish itself as the best guild around while also forging a new path forward for themselves. On one hand, it’s a good idea to start off the game’s story here as the whole idea of the guild needing to ‘rebuild’ gives a reasonable explanation for why all these developed characters have to start from the bottom again. On the other hand, newcomers without any background with the anime or manga will be completely lost as to what’s going on.

Aside from blink-and-you-miss-it name cards that appear next to each character in the beginning, you’re given almost no introduction for the events that are unfolding. You don’t know who any of the characters are, how they know each other, what the rules for this world are, or any other myriad information that would be useful for connecting with the story. An in-game encyclopedia you can later access does give a reasonable summary of much of these details, but an extensive lore dump is hardly an elegant means of filling you in on the story and even this doesn’t cover all the details. To say the least, Gust made this game with pre-existing fans of the franchise in mind; if you don’t fall into that category, prepare to have a confusing time.

So, newcomers are pretty much just ignored by the narrative but what of the longtime series fans? Unfortunately, they aren’t properly catered to, either, as the arcs covered here are condensed and distilled down to their most basic elements. The broad strokes are covered well and you can get the basic gist of the story, but it moves at a rather jarring and breakneck pace that seldom leaves room for organic narrative progression and character development. Yet, even given these shortcomings, it’s difficult to be too disappointed in the story on offer here. Despite the notable mistakes made, it remains mostly coherent and has all the typical goofy anime trappings that you’d expect. So long as you don’t come into Fairy Tail expecting an exceptionally well-written and engaging storyline, you’ll probably be satisfied with the passable effort that’s made here.

Gameplay follows the structure of a quest-based JRPG, with the majority of your experience consisting of the missions and bounties that you pick up from the board in the Fairy Tail guild hall. These are posted there by the residents of the community and mostly consist of basic fetch quests and tasks that offer up small rewards in money, experience, and items. Completing these will also raise the guild’s rank, which has the knock-on effect of slowly granting you access to higher-level quests and more upgrades for the facilities around the guildhall. For example, Lisanna runs a shop in which you can buy various items to help you out in battle, and upgrading the shop allows you to buy a wider variety of stronger goods.

Character progression remains mostly static, but there are some light means of giving the player greater control over how each character develops. For example, there’s an almost Persona-like social system between the characters you can have on your team, and running missions together will allow characters to build their relationships. Not only does this lead to new story cutscenes, but it also grants each character new passive buffs to bolster their battle prowess all the more. On top of this, you can also equip different Lacrima crystals to each character, each of which will grant various stat bonuses to further differentiate how that character is used in battle. It’s a little disappointing that there aren’t any skill trees or more advanced mechanics to give you greater control over character growth, but what’s here is satisfying enough to keep you engaged for a while.

Combat is turn-based and follows all the expected conventions. Each character has a litany of spells at their disposal with various elemental effects—such as how Natsu is a master of fire attacks—and enemies will take more or less damage depending on their elemental weaknesses and resistances. Having a well-balanced team with plenty of elemental coverage is a must, then, but an interesting twist with combat here is how great emphasis is placed on managing your enemy’s side of the battlefield. Enemies are positioned on a 3×3 grid, and each of your team member’s spells have a different ‘shape’ for their area of effect. So, when picking each character’s move, you often have to take into account how many enemies you can potentially hit with it. Some moves might even force enemies to move to specific tiles, so you can have one character work to corral them all in the right positions so another character can knock them all down in one shot.

Things are complicated even further by various supplementary buffs, such as how every party member’s attacks will collectively fill a gauge that can unleash a multi-member chain attack once filled, or how each character has a temporarily triggered “Awakened” mode where they change form and receive various powerful stat buffs and new spells. Elements such as these, combined with the focus on positioning your enemies right, can make for some nicely multi-layered fights, although this neutered a bit by the rather breezy difficulty of Fairy Tail.

Even if you ignore most of the side quests and sprint through just the required content for progressing the story, it’s fair to say that not many obstacles you encounter will stand up for very long before the unstoppable power of your team. If you do engage with the side content, that already yawning gap in power will only widen all the more. This is a plus for those who just want the power trip or aren’t too experienced with RPG’s, but it also has the effect of hamstringing the potential that the fundamentally well-made combat system has to offer. Sure it somewhat matters that you balance your team and be mindful of where your attacks are landing, but we seldom felt like the game was properly applying the kind of soft pressure necessary to encourage the player to engage with the full extent of the combat system.

In terms of presentation, Fairy Tail employs a wonderfully detailed art style that, unfortunately, is undermined by issues with poor performance. Character models are fittingly high definition and nicely animated, and though the environment design itself is a little uninspired, it’s little details like the accurate shadows cast by your characters that highlight Gust’s attention to detail. That’s to say nothing of the bombastic and over the top magic attacks your characters can use in battle, which often light the screen up with a tremendous display of multicoloured fireworks. That being said, the focus on excellent models and flashy details comes at the cost of the general experience itself. Whether you’re playing in docked or handheld mode, Fairy Tail runs pretty much constantly in the 15-20FPS range, with some dips going even lower when there’s a particularly theatrical attack used. Suffice to say, it looks far less than smooth no matter how you slice it, which gives Fairy Tail an overall sloppy feel.

At the end of the day, Fairy Tail is not a great RPG. Shortcomings in storytelling, pacing, difficulty, and performance all add up to make for a less than stellar experience which consistently seems to waste its potential. The well-made combat system and the adherence to the tone and content of the source material give occasional glimpses of the much greater RPG that Fairy Tail could be, but alas, it’s never really given the chance to spread its wings. We wouldn’t recommend you pick this one up, especially given the wealth of excellent RPGs available on the eShop right now, but we say that with the caveat that fans of the franchise will get a lot more out of this game than newcomers. If you happen to be a fan, Fairy Tail might be worth the punt if it’s on sale someday, but otherwise, we’d encourage you to look into other games.