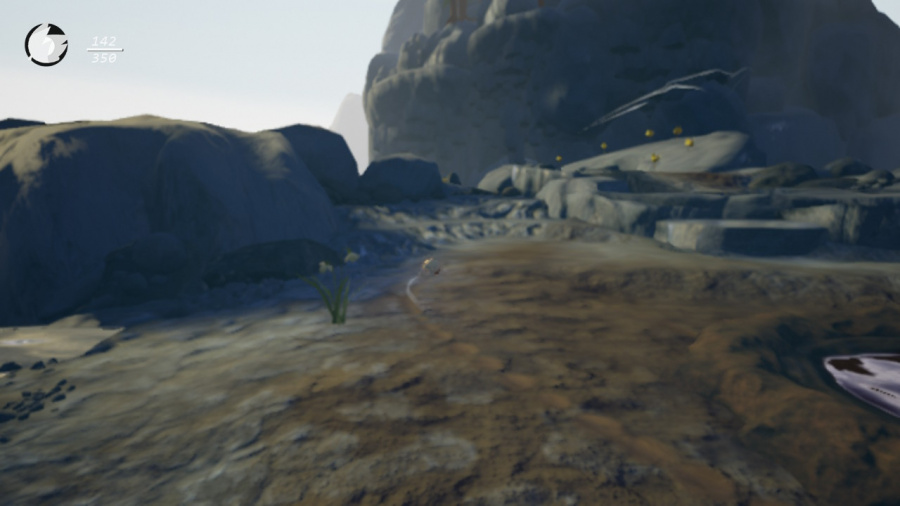 When it was originally announced, it was clear that Skully had the potential to be one of the top five greatest ‘reanimated rolling skull puzzle platformer’ games ever made. Sure enough, it manages to accomplish that (purely by existing, to be fair), but that’s not to say it isn’t without severe issues that will greatly affect your enjoyment of it.

You play as a skull called Skully. That isn’t his actual name, mind you: it’s the moniker bestowed on him by Terry, an excitable green-bearded chap who it quickly emerges is some sort of island god. Terry’s been having problems with his three similarly god-like siblings, so he decides to create Skully – by reanimating a skull that washed up on the shore – in the hope that he’ll help intervene in the argument and stop the island being destroyed.

In his initial form, Skully can roll around and jump, and not much more than that. Being a ball, he does have a degree of momentum as he moves around, although thankfully not too much because there’s a lot of platforming here. This game is not without its frustrating moments, but if Skully acted exactly like a ball and rolled a lot more freely than he does it would have been even more infuriating.

Since you can’t do a lot with rolling and jumping, you eventually discover three different forms that Skully can morph into, each providing him with different abilities. Strong Form turns him into a hefty big lad with a hell of a right hook on him: he can break down walls and create shockwaves that damage enemies. Swift Form, meanwhile, lets you hold down ‘ZL’ and charge up a speedy run that lets you clear large gaps. This form also lets you use magic to pick up and move certain blocks across the ground. Finally, there’s Vault Form, which gives you a double-jump and the ability to lift blocks into the air.

These forms are spawned by jumping into mud pools (which also act as checkpoints) and choosing which form you want. At any point you can also pull Skully out of a form, leave it standing there and head back to a pool to spawn another one, up to three in total. This makes for some decent puzzles at times: using a Vault Form to lift a platform into the air, for example, then spawning a second Vault Form, double-jumping onto the platform and double-jumping from that. It takes a while for the game to start getting inventive with its puzzles, though, and for the first half of your adventure most situations will be fairly obvious “okay, here’s where I punch a wall” moments.

On paper Skully looks like a winner, and when everything works like it should there’s a genuine sense of satisfaction to be had in moving on from each area to the next. Unfortunately, it’s plagued with problems that more often than not make the game more annoying than appealing. The most obvious of these is that it can look absolutely awful at times, which is clear when you look at the screenshots on this page (especially the handheld ones).

It’s clear that on other platforms this has the potential to be a beautiful game, but this appears to be another situation where a developer has decided to port to Switch, realised they’ve bitten off more they can chew and had to significantly downgrade the visual detail just to get the thing running at more than a single-digit frame rate. There’s some serious dynamic resolution scaling at work here, which means the game is constantly changing the resolution it renders at to try and keep things running smoothly (not that it does: the frame rate is all over the place).

Plenty of Switch games use dynamic resolution to try and keep performance smooth: even Mario Odyssey and Breath of the Wild do it. But the ones that do it best do it subtly and still manage to keep the resolution fairly high, whereas Skully fails to do this and much of the time you’re staring at an extremely blurry screen. It’s even worse on handheld, where you can stand still and see that it’s pretty blurry, then start running and instantly see everything get even blurrier to a degree that we rarely see on the Switch. Skully may look nice on other systems, but it’s extremely ugly on the Nintendo’s console.

The camera also leaves a bit to be desired. For the most part you’re practically in full control of it, which may sound great but it means you’re constantly adjusting it, especially in some later stages where you’re swooping around big curved ramps and the like. Sometimes the game will require you to roll into a tiny gap as Skully and the camera will invariably have a fit when it realises it’s going to have to follow you through it, but these moments aside, it just doesn’t feel very fluid to move around.

It’s even worse during the rare moments when you don’t have control of the camera. Some of the game’s set piece moments have a fixed viewpoint but these invariably were designed with a high-resolution presentation in mind and suffer greatly here. The ‘chase’ stages in particular – where you’re being pursued by a big wall of water or fire – are extremely annoying because the camera zooms so far out that, combined with the blur, you can barely see what’s going on (especially in handheld mode because Skully is absolutely tiny).

The other issue we had is more a matter of taste, but worth noting nonetheless: Terry (the god chap who’s accompanying you) can be very annoying at times. To be fair, the voice acting is of a generally high quality throughout: the three siblings you encounter have their own distinct personalities and are effective in their own way. Terry, however, is the irritating know-it-all type and while that’s deliberately part of his character it’s not the sort of person you want accompanying you for the entire game. He’s the type of guy you sometimes meet who thinks that shouting sarcastic punchlines makes them funnier: “Oh, YA THINK” and the like. Our knuckles are getting whiter with rage as we type this.

Skully isn’t an entirely lost cause. There’s an entertaining enough puzzle platformer hidden underneath its myriad visual flaws. It may be uglier than sin and you may be accompanied by an irritating voiceover throughout, but you’ll still have some fun playing through it and the plot does resolve itself in a nice way by the end. You’ll just need to be able to roll with a lot of annoyances to get there.